skip to main | skip to sidebar

changes in publishing and the dinosaurs left behind

new post on the new blog MONKEY WITH A PEN
Posted by anne frasier at 1:52 PM No comments:

MONKEY WITH A PEN
Posted by anne frasier at 8:40 PM No comments: 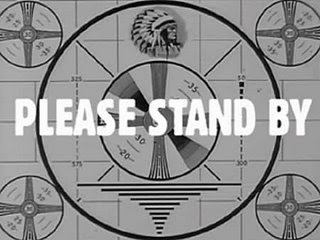 join me on twitter
Posted by anne frasier at 7:24 AM 3 comments:

I was so worried about readings and panels and making a total fool out of myself that it never occurred to me that I might actually ENJOY Diversicon. It was a blast. I went last year for a few hours, but a few hours wasn't enough to give me a feel of the convention. You really have to attend the opening ceremony and the auction and hang out in the hospitality suite. A lot of times even the panel events felt like a group of people just hanging out talking about books and movies. I loved the way the...can't call them audience... loved the way they participated in the discussions. The con was small. I think maybe 100 attendees. They would like to have around 150 next year. The auction alone would be reason to go. Donations of cool, collectible stuff. First edition books and comics. Movies.

The other guest is an absolutely amazing writer, not to mention a lovely person.

The signing and reading at DreamHaven was well attended. So glad about that!! And what an awesome bookstore! After the signing some of us walked down the street and shared a pizza. Nice day all around.


The Holiday Inn overlooks the 35W bridge. Today is the anniversary of the collapse, so I imagine there will be some kind of memorial and news coverage.

I have most of the day free since the convention doesn't get into full swing until this evening. meeting my daughter for lunch. Maybe we'll go to Bad Waitress? French Meadow Bakery? So hard to decide!

the life and art of sir alfred hitchcock

i brought my camera, but forgot the cable so no pics until next week.
Posted by anne frasier at 9:28 AM 5 comments:

bumping this to the top to show off the cool T-shirt designed by Marge Simon. 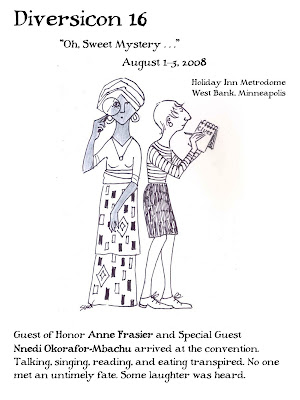 
Where: Minneapolis, Minnesota
When: August 1 - 3, 2008
Who?
Guest of Honor: Anne Frasier
Check out the Diversicon website and click on latest update to download PDF file and registration form.

But wait! That's not all!


Short stories up to 250 words on the convention theme of "Oh, Sweet Mystery . . ." Submit no later than midnight Central Time July 14 to diversicon16flash@gmail.com. No entry fee, but open only to attending members of the convention. Entries will be judged by the convention Guest of Honor, professional author Anne Frasier. Entries will be judged on the creative interpretation of the theme, the quality of the writing, and emotional/intellectual impact. Top prize is a cool certificate, the honor of winning, a round of applause, the opportunity to read your work to the assembled convention. For more information:

She holds a PhD in English (emphasis on creative writing) from the University of Illinois--Chicago; an MA in English, also from UI Chicago (thesis: The Legend of Arro-yo); and an MA in journalism from Michigan State University--East Lansing (thesis: Virtual Women: Female Characters in Video Games). She is also a graduate of the Clarion Science Fiction and Fantasy Writers Workshop.

Scheherazade (ca. 800): Legendary Persian narrator of The Book of One Thousand and One Nights, a compilation of Persian, Arabic, Indian, and other folktales, including "Aladdin and the Lamp," "The Seven Voyages of Sinbad," and "The Thief of Baghdad." A highly educated woman, Scheherazade distracted her misogynist husband from killing her by telling captivating stories. The various translations of these tales have influenced artists, composers, and screenwriters around the world.

Sir Alfred Hitchcock (1899-1980): Director of many films over five decades in Great Britain and the United States, including the haunting Rebecca (1940), Shadow of a Doubt (1943), Rear Window (1954), Vertigo (1958), North by Northwest (1959), Psycho (1960), and the SFnal The Birds (1963; guaranteed to make you nervous around flocks of crows!), Hitchcock worked repeatedly with interlocking themes of sex and death. He also featured female characters who were both glamorous and strong actors with their own agendas, and he dealt obliquely with homosexuality despite the Hollywood Production Code.

Jack Williamson, PhD (1908-2006): Author of Darker Than You Think (1948), The Humanoids (1949), a collection of short stories titled The Best of Jack Williamson (1977), and the autobiography Wonder�s Child: My Life in Science Fiction (1984, rev. 2005), Williamson traveled west by covered wagon in 1915, then went on to write imaginative science fiction over many decades. He first saw his work published in an SF magazine in 1928, he cowrote the first story of revolution on the Moon with Dr. Miles Breuer ("The Birth of a New Republic," Amazing Stories, Winter 1931), coined the word terraforming in his 1942 novel Seetee Ship, and saw his last novel (The Stonehenge Gate) published in 2005. Science Fiction and Fantasy Writers of America (SFWA) honored him with its second-ever Grand Master award in 1976 (the first recipient was Robert Heinlein). He won both the Hugo and Nebula Awards (for his novella The Ultimate Earth) in 2001, becoming by far the oldest author to have won these awards. He earned a PhD in English from the University of Colorado--Boulder (his dissertation focused on the works of H. G. Wells) and taught science fiction writing at Eastern New Mexico University from 1960 through the 21st century.
Posted by anne frasier at 7:30 AM 6 comments:

anne frasier
Anne Frasier, USA Today bestselling author of Hush, Sleep Tight, Play Dead, Pale Immortal, and Garden of Darkness, has been recognized with numerous awards including the RITA and Daphne du Maurier for romantic suspense. Publishers Weekly says Frasier "has perfected the art of making a reader's skin crawl." The Minneapolis Star Tribune calls her a "master." She divides her time between Minnesota and Wisconsin.